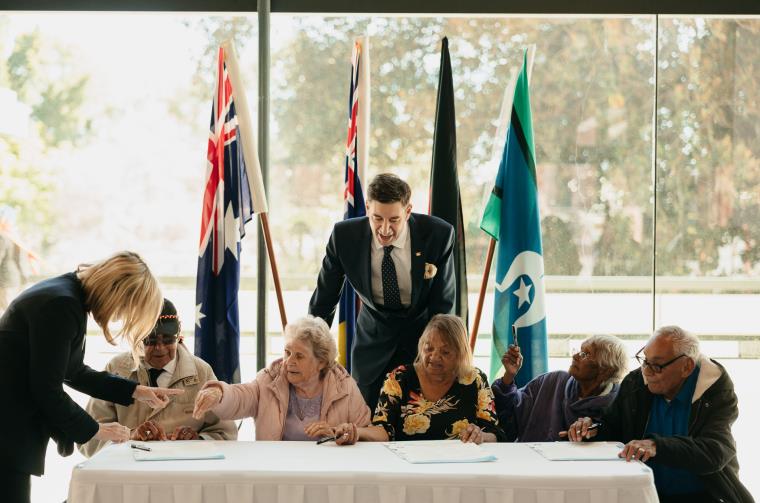 The City of Perth has officially entered into a Yacker Danjoo Ngala Bidi with representatives of the City of Perth Elders Advisory Group. City of Perth Lord Mayor Basil Zempilas, CEO Michelle Reynolds and Aboriginal Elders took part in a ceremony yesterday to sign the significant document, acknowledging Whadjuk Nyoongar people as the Traditional Owners of the land on which Perth city is located. Yacker Danjoo Ngala Bidi means ‘Working Together Our Way’ in Whadjuk Nyoongar and is reflective of the genuine steps the City has taken with the Elders Advisory Group towards reconciliation. The process began in 2018 as part of the City of Perth’s Reflect Reconciliation Action Plan. The Elders are the Bridyas (bosses) and as such are recognised, valued and honoured by the City as heads of the Aboriginal community. They are Elder Theresa Walley, Elder Doolan Eatts, Elder Ben Taylor, Elder Margaret Culbong, Elder Muriel Bowie, Elder Walter Eatts, Elder Farley Garlett, Elder Irene McNamara, Elder Albert McNamara and Elder Noel Nannup. Read more here: https://perth.wa.gov.au/news-and-updates/all-news/city-of-perth-to-enter-into-yacker-danjoo-with-aboriginal-elders View part one of the Yacker Danjoo video series here: https://fb.watch/8kRBdHf67x/ Issued by: Brooke Hunter, Senior Media and Communications Advisor, 08 9461 3425 (includes after hours), brooke.hunter@cityofperth.wa.gov.au The City of Perth acknowledges the Whadjuk Nyoongar people as the Traditional Owners of the lands and waters where Perth city is situated today, and pay our respect to Elders past and present. Celebrate with the winning team at Footy Place Budget adopted with zero per cent rates increase for ratepayers

Powered by Curator.io
Follow
Copy Link
Spring is here and so is magpie nesting season

City of Perth celebrates one year of Containers for Change